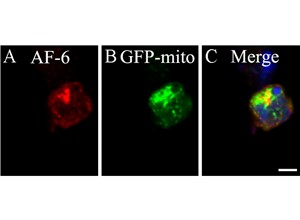 Spatial overlap between two or more emission signals of multiply labelled fluorescent specimens can be observed and quantitated in confocal microscopy. The ability to determine colocalization is limited by the resolution of the optical system and the wavelength of the excitation light. Scanning of biological specimens is done on multiple precision thin optical sections and multitracking confocal mode. Graphical display is represented by a scatterplot which correlates the relationship between the intensities of each voxel in the two channels in question. Analysis of the distribution pattern generated by the intensity pairs enables identification of fluorophore colocalization, background discrimination and bleed-through. For analysis reserve the offline Zeiss Zen software Computer analysis 4 or the Computer IMARIS software.