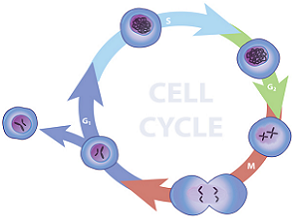 Propidium Iodide (PI) is most commonly used as a fluorescent molecule that intercalates into the major groove of double-stranded DNA and can be excited at 488 nm with a broad emission centered around 600 nm. Since PI can also bind to double-stranded RNA, it is necessary to treat the cells with RNase for optimal DNA resolution. Certain cells have a tendency to adhere to one another forming doublets, triplets and aggregates. Despite the hydrodynamic focusing that occurs at the flow cytometer’s laser intercept, more than one cell sometimes passes through the laser simultaneously. This can result in the recording of what appears to be single cells with very bright fluorescence which are in actuality doublets or more e.g two cells in G0/1 that are stuck together will have as much nuclear fluorescence as one G2/M cell. As a result, during analysis, the G2/M percentages will appear erroneously high. The probability of doublets will increase when flowing at high event rates or a high pressure differential. Proper sample preparation and pre-filtering of the sample can minimize doublets or clumps of cells. Aggregates and simultaneously read events are sometimes unavoidable during the acquisition part of cell cycle analysis. Exclusion of “non-single” cells from later analysis is accomplished through the use of signal pulse processing by the cytometer and careful optimization by the operator.

This is done by preparing the following plots: