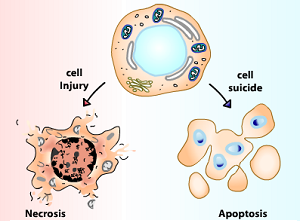 Apoptosis is the process of programmed cell death (PCD) that occurs in up to a billion cells in the human body each day. It is tightly controlled and necessary for typical growth and development in multicellular organisms. Defective apoptosis can result in abnormal development and pathogenesis. Apoptosis is executed by two key apoptotic pathways: the death receptor pathway (also known as the extrinsic pathway) and the mitochondrial pathway (also termed the intrinsic pathway). Both pathways are relatively complex, and are regulated by multiple complicated extrinsic and intrinsic ligands. The process of apoptosis can be described as a distinct set of (1) morphological changes involving the plasma membrane, cytoplasm, and nucleus; (2) biochemical and molecular changes, such as loss of mitochondrial membrane potential, cleavage of proteins and phosphatidylserine externalization.

Those many changes may be measured by varios methods on flow cytometry, among them; caspase activation, DNA content and Annexin-V binding analysis are most widely used. For more information on how to measure apoptosis and cell death with flow cytometry, please contact us.

Non-viable cells e.g. necrotic and late apoptotic cells, often show patterns of non-specific antibody-binding potentially leading to erroneous conclusions, particularly when cell frequencies are low. Therefore, cell viability tests should be used in most experiments as a method to eliminate dead cells prior to immunofluorescence analysis. In addition, quantitative analysis of cell viability by flow cytometry can be used to assess the cytotoxic effects treatments (e.g., drugs) on defined cell populations.

Cell viability is usually addressed by using dye exclusion and/or dye retention protocols. The former is used to determine cell membrane integrity while the latter measures the physiological state of the cell. Dye exclusion methods typically use non-permeable dyes, such as propidium iodide (PI) or 7-amino Actinomycin D (7-AAD), that do not enter cells with intact cell membranes or with active cell metabolism. Once inside the cell, these dyes bind to intracellular structures producing highly fluorescent adducts which identify the cells as “non-viable”.  Retention dyes indicate viability by detection of active cell metabolism which initiates the conversion of non-fluorescent substrates into highly fluorescent products (e.g. fluorescein diacetate to fluorescein).

Determination of cell viability after fixing

The ability to stain live cells with a viability dye and preserve that staining pattern after fixation is critical for intracellular immunophenotyping or when cells are infected with a pathogenic organism.

Fixable Dead Cell Stain Kits are based on the reaction of a fluorescent reactive dye with cellular proteins (amines). These dyes cannot penetrate live cell membranes, so only cell surface proteins are available to react with the dye, resulting in dim staining. The reactive dye can permeate the damaged membranes of dead cells and stain both the interior and exterior amines, resulting more intense staining.