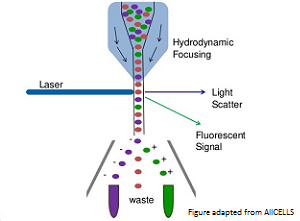 Cell sorting is the process where the flow cytometer (not all flow cytometers are sorters) physically separates cells of interest and places them into collecting tubes. This can be done at high purity and rates while keeping the cells viable and sterile. Most commercial sorters use the principles of electrostatic, droplet sorting. The first part of sorting is analysis. Cells of interest are marked in the flow cytometer and this information is used to make the sort decisions. In order to sort, the fluid stream containing the cells must be precisely (and reproducibly over a substantial time frame) broken into droplets-the cells will partition into the droplets. To do this an acoustical energy is supplied to the fluid within the nozzle and this energy travels down the fluid stream and causes the stream to divide into droplets. The sorter’s computer can figure out which droplets will contain the cell of interest. When that droplet is the last attached droplet to the fluid stream an electric charge is placed on the stream and maintained until the droplet separates from the stream at which time the charge is reset to zero. Having detached from the stream and, thus, no longer connected to ground, the droplet retains the charge applied to it. The droplet then passes (falls) through a high energy electric field and the droplets are deflected by controlled amounts to fall into properly placed receptacles. The charge applied to the stream and to the droplets may be either positive or negative and, in addition, each may have two amplitudes. Thus, we can sort up to 4 streams and, thus, 4 populations simultaneously. The sorter may also be configured to deposit cells (as few as one per well) into various sized multiwell plates (up to 384 well configurations).